At first glance this might not seem like cool-weather clothing, but the outfit includes a coordinating cardigan. I took a picture with the dress alone to show off the funky pattern and the buttons on the gingham ribbon. I would like a dress like this for myself! It's from Treasured Trousseau, (eBay seller nameless). She does actually have a name, and seems like a very nice person from our email correspondence. 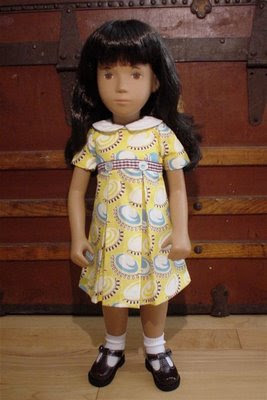 As one of Treasured Trousseau's first customers, she also sent me a gift -- a designer label shirt and shorts set. Very thoughtful and very cute. I'm looking forward to more auctions from this designer (and hopefully more winning bids). 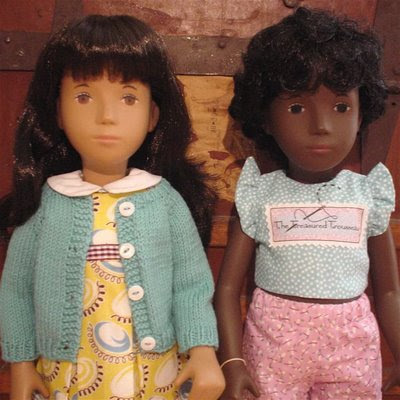 Posted by franberry at 9:45 AM No comments: Links to this post

I've been buying a bunch of fall/winter clothing for my dolls, most of it on eBay. When I saw this holiday folklore outfit from dfscarbrough, I knew it would be perfect for Cathy. Her short hair doesn't cover up any of the jacket's winter scene. I like how these trees are made of the same red calico fabric as the blouse. 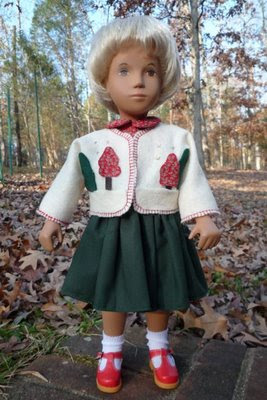 Here's a view of the charming house on the back, complete with metallic stars in the sky. 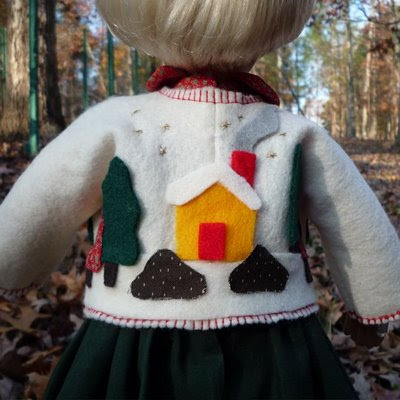 I was hesitant to put this school girl outfit on Cybil at first (should redheads wear burgundy?), but think it looks marvelous. The turtleneck is actually a bodysuit which keeps it from bunching up (and also keeps people from seeing her panties -- very important if you ask Boo). It was made by eBay seller specialdelivery2006, who also made one of my lovely white with pink party dresses. 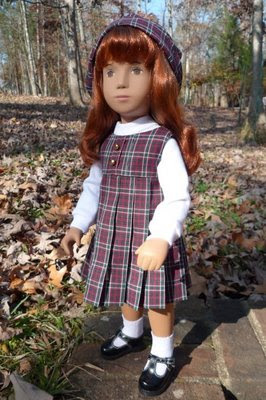 Posted by franberry at 9:43 PM No comments: Links to this post

Gregor Sandy "Hiker" is the only male doll I currently own. He was produced in 1986, with fewer than 400 made before the factory closed. He is the only Gregor with sandy/honey blonde hair. Both of these facts make him a bit special, at least in my eyes. 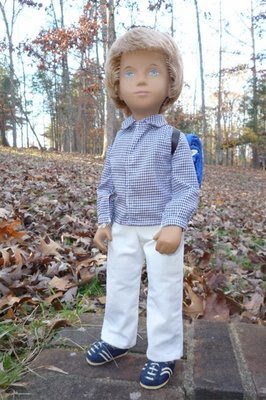 He wears a pack on his back which includes a rolled up sleeping bag, and looks pretty darn cute in his cap. It's a bit chilly for sleeping outside here, so I don't think he'll trek very far today. The spot you see under his nose in this picture is not caused by the camera, but actually exists; he has a small, perfectly round, shiny dot which catches the light at certain angles. Go figure. [UPDATE: It was caused by something on the surface, not a flaw in his vinyl. I gently washed his upper lip, and the spot is gone!] 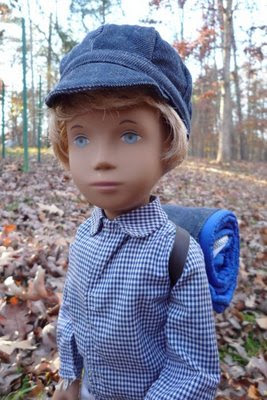 My husband is not sure how Gregor survives spending all his time with thirty females.
Posted by franberry at 9:59 PM No comments: Links to this post

Sweet Adeline,
My Adeline,
At night, dear heart,
For you I pine;
In all my dreams,
Your fair face beams.
You're the flower of my heart,
Sweet Adeline.

Adeline is an eBay find. She was a bargain (at least in my opinion) because she has been well-loved and is in need of a little TLC. I believe she is was produced in 1968. I call her my "Mystery" Blonde because I don't know how she was originally dressed: blue cord, brown cord, jeans, perhaps even gingham if she's from 1969 instead. She came to me wearing a cute dress from Dolliepatch which Boo is already begging to put on Calla. I'm going to dress her as a blue cord girl with an outfit I purchased from Sasha Doll UK -- a fabulous website for both shopping and dreaming. 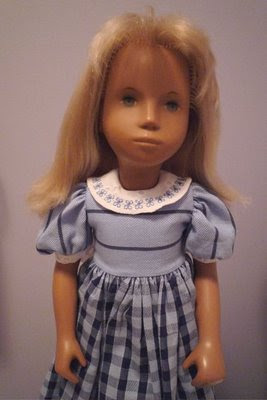 After the Holidays I plan to send Adeline on a trip to the Sasha Spa. She has a nose ding and some scrapes on her face that will probably remain, but a few of her flaws can be easily fixed: she is a bit grubby, her arms no longer hold a pose, and several plugs of the first row of her bangs have been chopped. 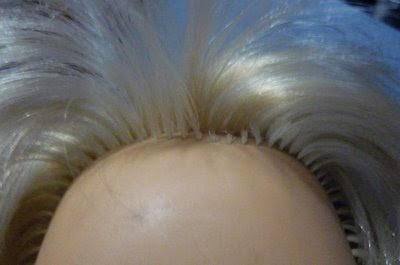 On the plus side, her bangs are thick enough to conceal the chopped bit and her hair is quite nice overall. It's a bit dry at the ends, but nicely two-toned with a part on top. Her lip paint is basically non-existent, but her eyes are glorious. 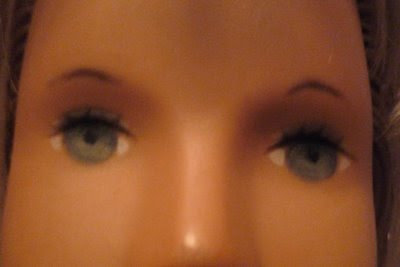 I will post more pictures of Adeline after her R and R.
Posted by franberry at 8:39 PM No comments: Links to this post

Today was a miserable rainy day and not good for taking pictures, but I decided to try anyway. "Dagmar" is the first older doll I purchased -- a 1969 Blue Cord with her original clothing (and her original stringing). I absolutely adore her, especially her wide face! Her hair has very choppy bangs/fringe, and a side part on top. Since "a picture is worth a thousand words", I'll let you stop reading and start looking. (FYI: clicking on a photo takes you to a larger version.) 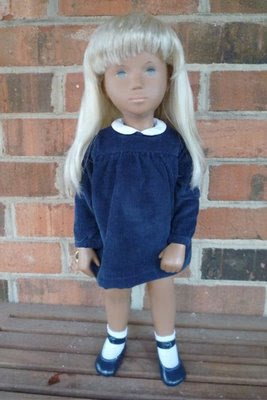 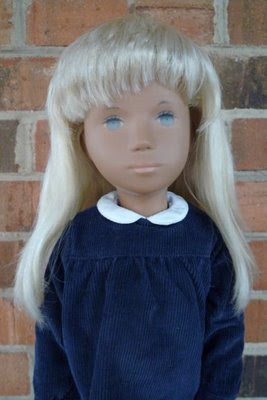 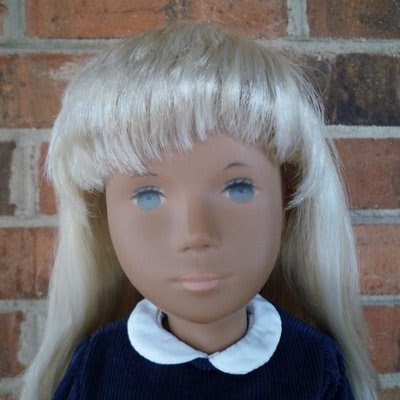 Here's a picture of her side part from above. I was standing behind her, so she's facing the top of the photo. You can see her lovely two-toned hair color in this shot. 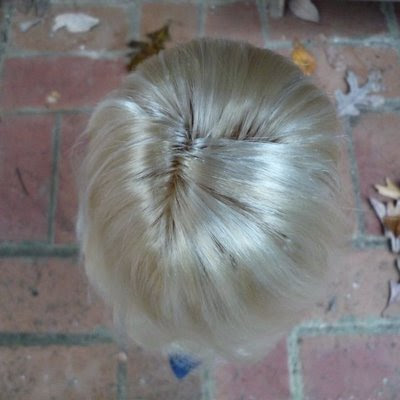 Posted by franberry at 8:21 PM No comments: Links to this post

There is no longer any question in my mind -- I'm addicted. As you will see from my upcoming posts, my Sasha collection has branched out quite a bit from my original intentions: a doll or two to play with plus a dozen Later Gotz to display, no make that 16 and add a 1960's showpiece ... I now own five "playing" dolls from the 1980's, 18 Later Gotz (almost all with their original outfits), three 1960's Trendon (plus my showpiece 1968 Fringe who is still on layaway), and four 1986 Trendon (their final year). I'm limiting myself to the number of dolls I can store in my new display case plus the "playing" dolls already in my possession. I'm still looking for a few specific dolls, then I'm going to have to stop buying. This will make both my husband and my bank account happy. I may need some sort of twelve-step program to help me resist temptation. Is there a Sahsas Anonymous? After all, a Sasha collection can never be truly "complete".

Here are a few pictures of my collection in the display cabinet: 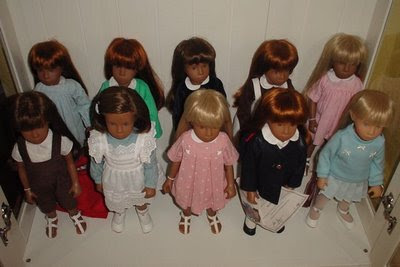 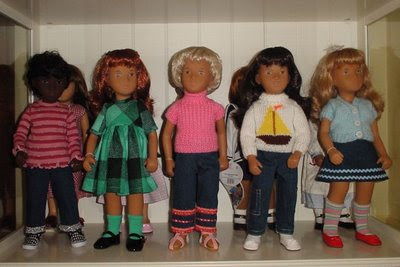 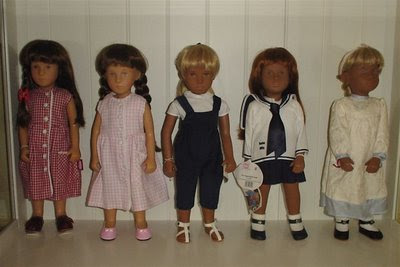 I'll be introducing the dolls who are currently on the top shelf in upcoming posts. I'm not including a group picture here, so as not to spoil the surprise when you meet them individually.
Posted by franberry at 9:14 PM No comments: Links to this post

I'm "playing" with my "displaying" dolls but sometimes it's hard to resist, especially for those not in their original outfits.

A nice eBay seller (afewdolls I think) sent along a Gotz outfit with one of my doll purchases, the pink dress and full white panties from the Daniela dress set. Sofie and Daniela are from the same year, and both have similar blonde hairstyles. I also have a white vest and white sandals from a Sarah dress set (which I don't really need seeing as I have Sarah in her original clothing), so I decided to put them to use. Sofie now looks a lot like Daniela, minus her white straw hat. 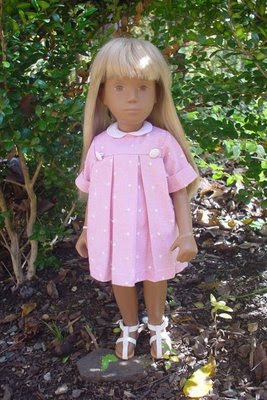 The pink plaid dress that Sofie was wearing is now on Anika, and matches her pink shoes perfectly. With their pale skin and brown hair, Stella and Anika look like sisters in their matching dresses. 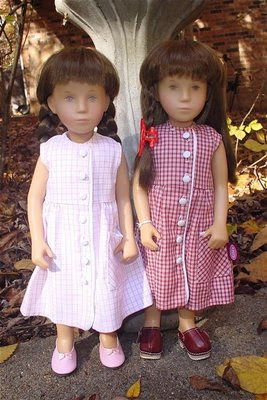 Marianne needed to cover her bare feet, so I've given her the white Bonika shoes that I bought for Sofie. They're not the style of shoe she would have worn originally, but they look nice none-the-less. Who knows, perhaps one day I'll find her the correct replacement footwear.
Posted by franberry at 8:11 PM No comments: Links to this post

Marianne is a limited edition doll from 1995. Unlike Ira, her body is not marked in any way. Her dress has a certificate attached saying she "... was dressed in a Limited Edition of 500 dolls for 1995 subscribers of 'Friends of Sasha'." Both the certificate and a tag sewn inside her dress are numbered 153 out of 500. 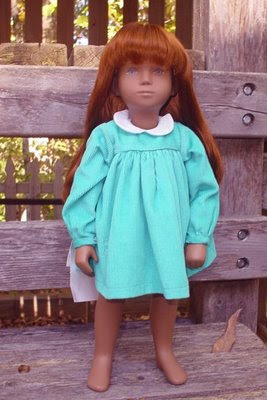 Marianne is a reproduction of an early Gotz Sasha wearing a teal cord dress. She had white shoes and socks originally, but lost them at some point in her past. Her red hair has long bangs/fringe and she has the same combination of blue eyes and no freckles as Kyra (though Marianne has eyelashes and Kyra doesn't). 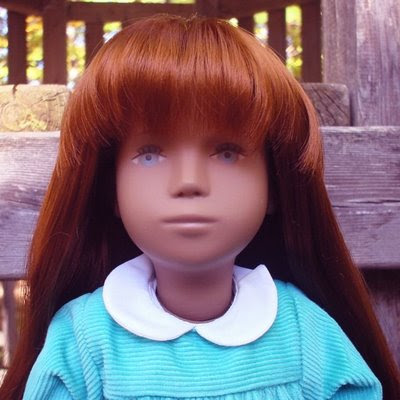 Posted by franberry at 8:52 PM No comments: Links to this post

One Girl and Her Doll

I have decided that Calla should officially belong to Boo. She enjoys playing with her so much that I've given up worrying about what might happen. And as my husband rightly pointed out, I have a lot of other dolls. 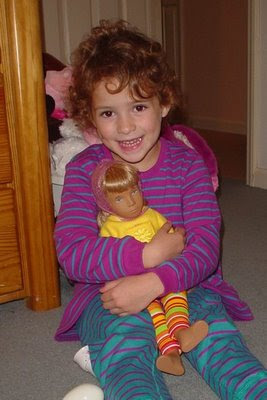 Today we dressed Calla in some bright new Nellie-Rose Doll Fashions made by eBay seller maudie-mays (these are great for children as they're cute, colorful, and easy to get on). Then I helped Boo cut a fabric scrap to create a simple triangular headscarf and a sash, which she though was great fun. I'm planning to re-read the "Advice on child sewing for dolls" thread on Sasha_Mart, as I have a feeling that information will come in handy in the not-so-distant future. Once Calla was suitably dressed, they shared some tea and a few laughs in Boo's bedroom. 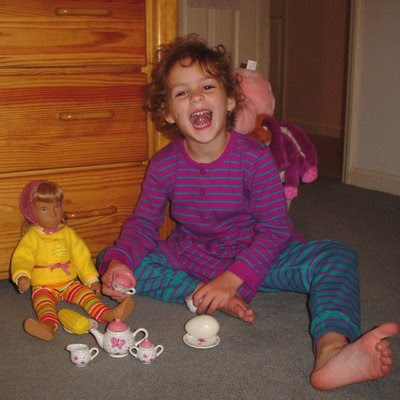 Posted by franberry at 9:31 PM No comments: Links to this post

This is a doll after my Dad's heart -- her hair is long enough to sit on. 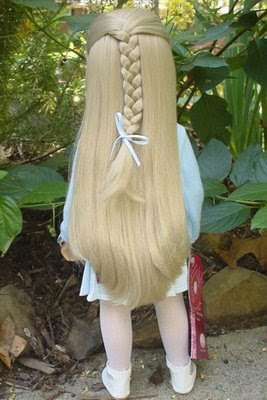 Carmen is a pale-skinned "modern" doll, produced in 2001. Her light colored hair and eyes accentuate her light colored skin, giving her a very different look from my other Sasha dolls. She seems Scandinavian to me. My other "modern" dolls (Stella and Anika) have brown hair, which I think helps counterbalance their lighter skin. 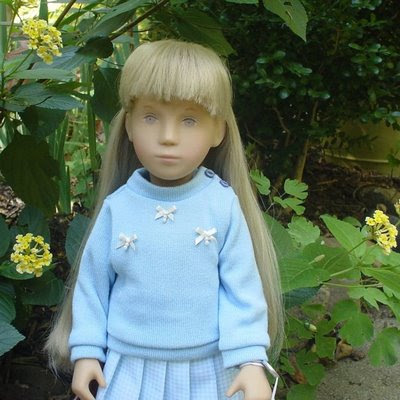 While she isn't a limited edition doll, she has a folder and certificate similar to Ira's (who was also produced in 2001). The front of the folder indicates she is a "Numbered Artist Design". Her certificate says "No __" with 752 written in pen (while Ira's says "No __ of 750" with 168 written in pen).
Posted by franberry at 11:01 AM No comments: Links to this post