The 2013 Sasha Festival is happening July 11-14 in the Cincinnati area. Save the dates and start saving your pennies! Here is the announcement card, which shows the theme and details. 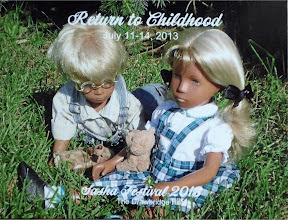 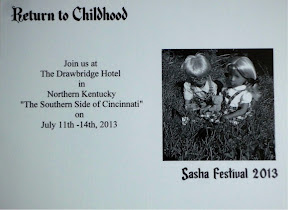 I'll share a link when the website is up and running. Registration is slated to start on December 21, so that should be soon. Eight months and counting down ...

12/2/12: Note that The Drawbridge Hotel is closing so the Festival will be held at a yet-to-be-determined alternate site. New information coming shortly.

4/21/13: I'm not sure if there's going to be a website this year or not. I've uploaded a digital copy of the registration form to my google docs -- click on the link to download. Anyone looking for additional information should contact Heidi directly.

6/1/13: Heidi has announced the themes for the main events, if you want to dress your dolls (or even yourself) to suit the theme.

Posted by franberry at 10:33 PM No comments: Links to this post

Mother Nature isn't cooperating with my picture taking efforts. These pictures were taken last weekend when the weather was cloudy due to Hurricane Sandy. I was hoping to retake them this weekend but there's still no sunshine. My biggest complaint is that the colors are off from having to turn on lights, so perhaps it's time to invest in some "natural light" lightbulbs.

This lovely lady is a 1966 np with the developmental eye style. Her brows have silvered, but I think that just adds to her striking appearance. She is in desperate need of a cleaning and restringing (she's leaning against the wall here so she doesn't topple over) which will hopefully happen soon. I figured I'd share a few pictures first, and showcase a new outfit at the same time. Marti Murphy made the dress and coordinating shoes (and undergarments too, which you can't see). It is similar to the ribbon dress that I won in the Childrens' Fund Auction, but the fabric has been dyed. 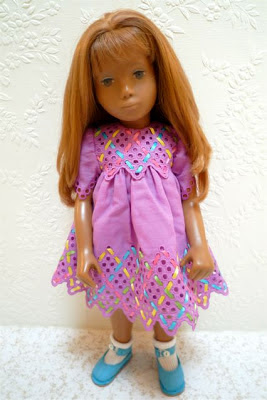 I probably should have ironed the dress or at least made sure it hung nicely in all the photos, but I was preoccupied with keeping Jessica upright and trying to avoid bad shadows. This was one of the better shots otherwise though, so I decided to include it. 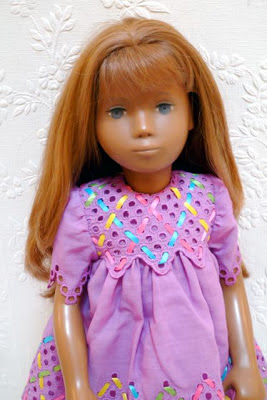 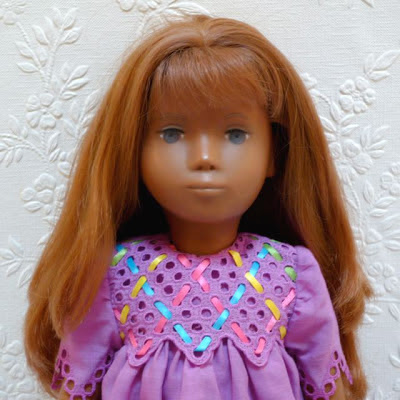 Posted by franberry at 3:48 PM 8 comments: Links to this post