You may have noticed that the dolls were wearing bracelets in my last post. I made a bunch of ID bracelets using kits I purchased online from bead*bee. Each bracelet uses 10 7mm beads on an elastic cord. The pink and blue beads here don't indicate gender, but coordinate to their original clothing - Enid is a Gingham, while Layla is a Party. 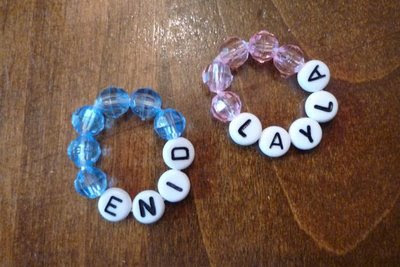 Posted by franberry at 11:13 PM No comments: Links to this post

And now, back to our regularly scheduled programming ...

I promised to post comparison photos of my dungarees girls after the festival, and here they are. I took these pictures on an overcast day, so the brightness varies depending on whether the sun was behind a cloud or not. Here they are all lined up together (l to r): Harlow, Hester, Hayley, and Hedwig. 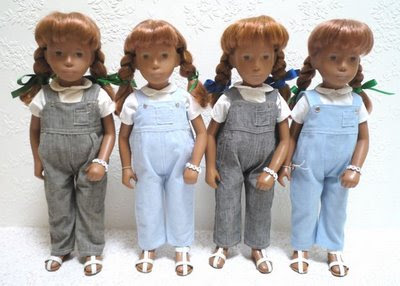 So similar, and yet so different. 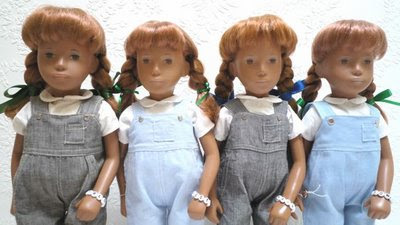 Here are the two "dark" dungarees girls, Harlow (green ribbons) and Hayley (blue ribbons). They both have fairly deep bangs, though Harlow's are deeper. She also has a wider face than Hayley. 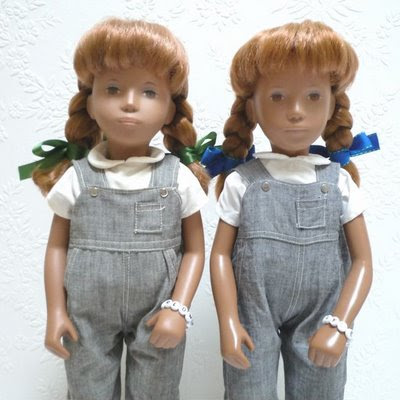 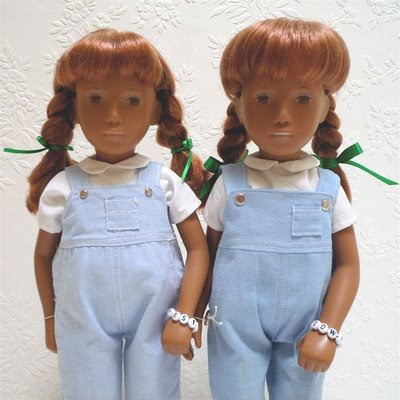 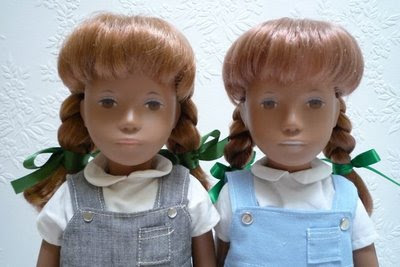 Here are the two narrower faced girls, Hayley (dark dungarees) and Hester (light dungarees). Hester is the shortest of the four. 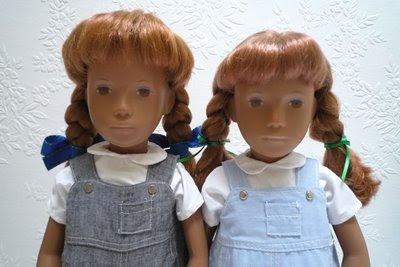 Posted by franberry at 10:15 AM 4 comments: Links to this post

This is my last post about the festival, highlighting some of the clothing I acquired there. The festival souvenir outfits were shown in a previous post, but I came home with quite a few additional outfits.

First is last year's festival souvenir outfit, modeled by Rose. (Dorothy isn't usually pictured as a blonde, but Boo really wanted one of her dolls to wear it.) I won this at the Children's Fund Auction as part of a group of 2008 Sasha Festival Souvenirs. Sweet! 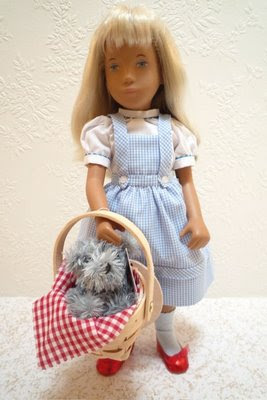 Second is another outfit I won at the Auction, modeled by Cathy. Peggy Trauger made this top and jumper with an embroidered child flying a kite. She was at the Auction, and graciously posed for a picture with Muriel and me afterward. 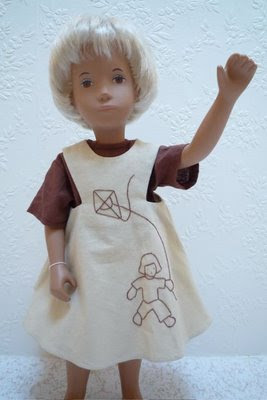 Third is the dress I wound up with at the Sasha Gift Exchange, modeled by Chloe. It was made by Wilma Robards, who I spent quite a bit of time talking with over the course of the weekend. (The gift I brought was a Liberty floral dress made by Patty at The Sasha Wardrobe, which Tina wound up with.) 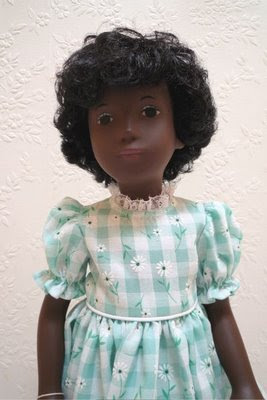 Fourth is a crochet dress I purchased at the Sales Room, modeled by Cameo. This dress was made by Barbara Jo Keats, who sold a wide variety of items crocheted using cotton thread. I was planning to buy a dress with a fabric bottom, but fell in love with this all-crochet one. 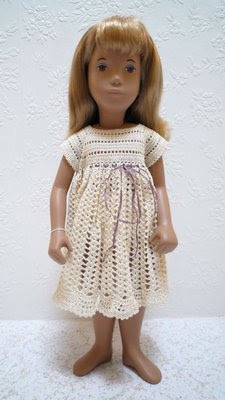 Fifth is another outfit I purchased at the Sales Room, modeled by Cindy. This beaded dress with leggings was made by Kathryn Goodwin. She also had some cute homemade leather moccasins, but I was out of money. Perhaps I'll buy a pair next year, but for now I have these black suede moccasins that I won in the Helper Raffle. 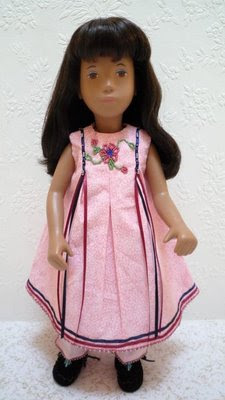 Sixth is a pale green smocked dress I won in the Helper Raffle, modeled by Cybil. I was too rushed today to iron it, so I'm only showing the top ... perhaps I should pretend I've just chosen to focus on the smocking. :-) 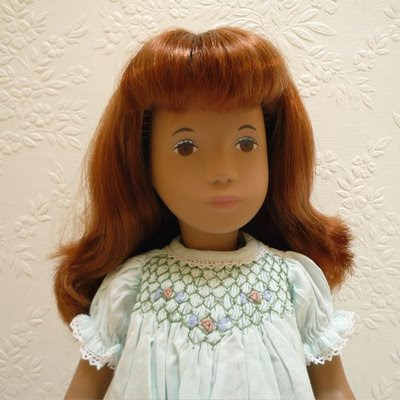 Believe it or not, there is still more! I won two baby outfits (one at the Auction and one in the Helper Raffle), but don't have a Sasha baby to model them - yet. I was hoping I'd win one of the auction or raffle babies. I also won three other auctions: a striped knit hat, a set of 10 Studio Doll Museum postcards, and some Sasha collectibles including a set of 20 Trendon postcards and a Sasha logo pin. Plus I won several other items in the Helper Raffle, including two tea sets. How did I manage to get everything home?!
Posted by franberry at 7:20 PM No comments: Links to this post

I didn't buy any new dolls at the festival, but I did come home with a whole lot of Sasha-related stuff. So much stuff, that I had a hard time fitting everything in my suitcase for the flight home. Fortunately one of the festival souvenirs was a reusable Wegmans shopping bag; I stuffed it full (including my purse) to use as my personal carry-on item. The festival souvenir outfits (and one of the table gifts I received) were pictured in my last post. I decided to show a portion of my other festival souvenirs in this post.

Friday morning was devoted to workshops. There were four craft items to complete: a pair of miniature postcards, a Czech glass beaded necklace, a lilac hat, and a scrapbook memory page. I'm not very crafty (unless you count "like a fox"), but the items were relatively simple and I managed to muddle through. I brought the scrapbooking packet home to work on; you can see some of the postcards and photos that were included at the top of this picture, along with my other finished craft items. 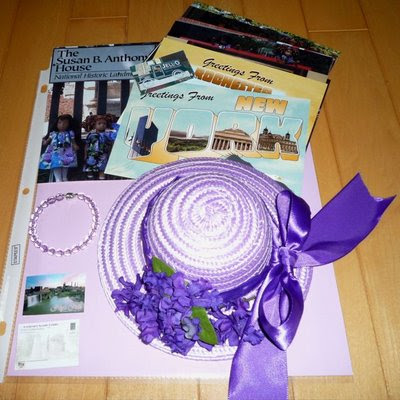 There were souvenir items on the tables at all three of our group meals. Some were festival souvenirs that everyone received, while others were gifts from the table hostesses and thus unique for each table. I'm certain that the items shown below were festival souvenirs (many had tags explaining their significance to the region), though I'm sure there were others. I included my nametag in the picture, as well as the special round pin I received indicating that this was my first festival. 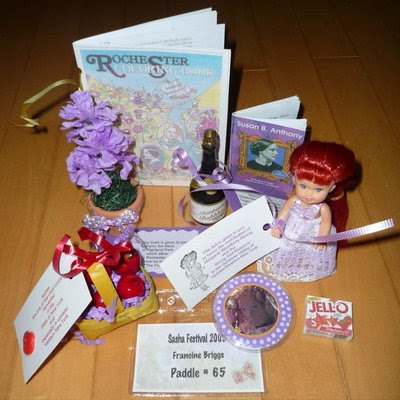 These items were on the table I sat at for the "Celebrating the Boys" luncheon on Saturday. I believe the painted toybox and boy-themed toys were all gifts from the table hostess(es), though I can't recall name(s). 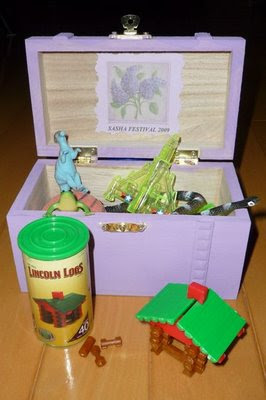 I think this is the rest of the souvenir items I brought home, a mix of festival and hostess gifts. In the upper right corner is the edge of the round fabric-covered box that contained the Sasha festival outfit; the box in front of it contained the two necklaces I received on Sunday. I added my auction paddle to the mix, but not any of the other items we received at registration: shopping bag, journal, auction item list, Gotz catalog, pattern, postcards ... As I said at the beginning of the post, I brought home a whole lot of Sasha-related stuff. 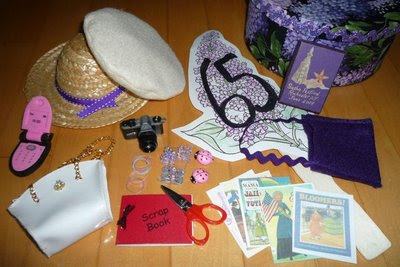 Of course this doesn't include items from the Gift Exchange, Children's Charity Auction, Sales Room, or Helper Drawings. I'll include pictures of some of those items in my next post.
Posted by franberry at 3:32 PM 2 comments: Links to this post 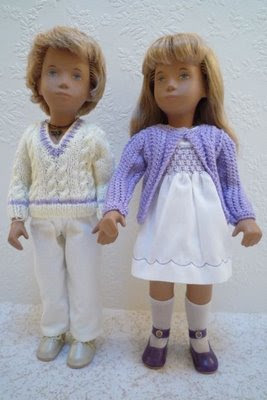 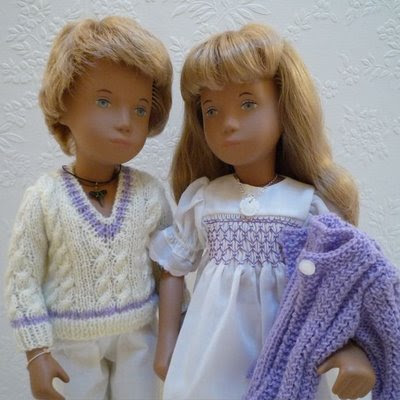 Gregor and Calla are also wearing necklaces which weren't part of the official outfits; I received them as a table gift at Sunday's brunch. The shark tooth and sand dollar necklaces were made by Dominic and Carolyn Ruscio, who winter in Venice, Florida (the "Shark Tooth Capitol of the World"). I think they complement the outfits perfectly! 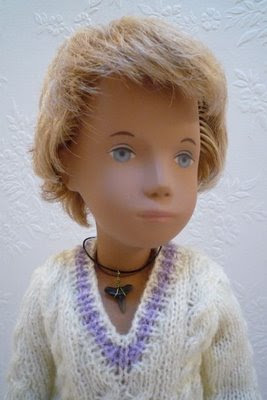 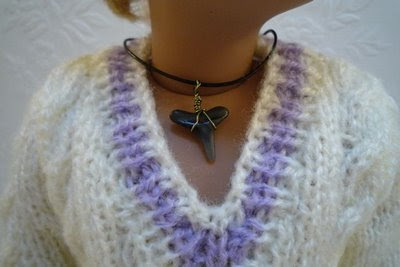 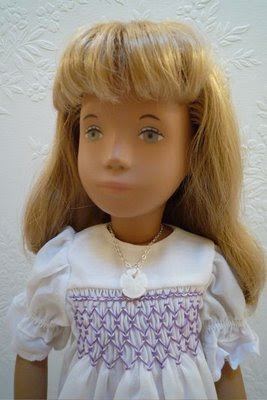 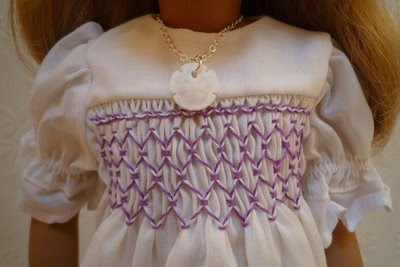 Jean Jensen's shoes are such a delight that I felt they warranted their own pictures. 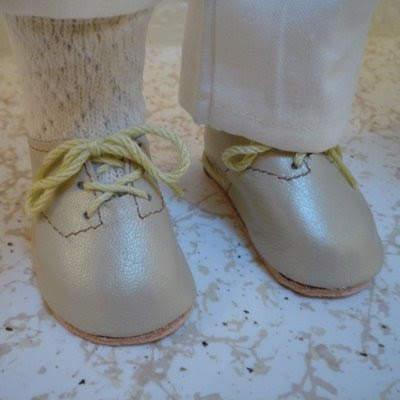 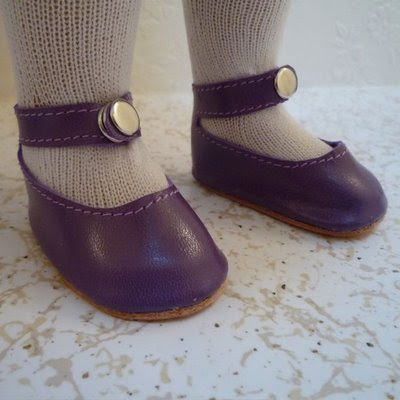 Posted by franberry at 8:17 PM No comments: Links to this post