I uploaded my 400+ Festival pictures to an album on Picasa. The album contains pictures from the entire festival: Children's Charity Auction and Raffles, Helper Drawings, and the amazing Studio Doll Exhibit, as well as group meals and gatherings. There are lots of pictures of Sasha dolls and Sasha doll enthusiasts. Here is a slideshow of the entire album:

Clicking on the picture below will take you to my Picasa album. There you can see all the photos from this slideshow, along with descriptive captions (special thanks to Meg for helping me with names for some of the 'Meet and Greet' photos):

I had an absolutely spectacular time at the Sasha Festival over the weekend! This was my first non-business trip without the kids, and it was nice to spend it in the company of such a friendly group. I had been looking forward to meeting several people I've communicated with who I knew would be in attendance. It was great to spend time talking and getting to know one another better. They were every bit as warm and wonderful as I imagined they'd be. You may have seen these names in previous blog posts: 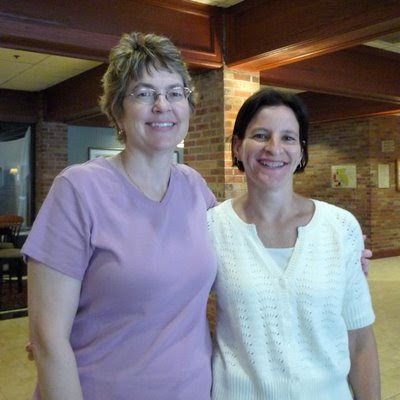 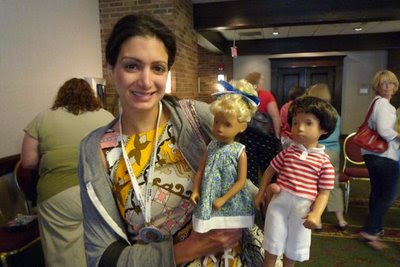 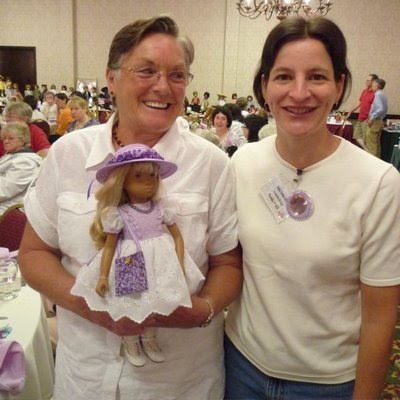 I also met Gabi, who I knew would be blogging from the festival. Her posts and pictures do a good job of capturing all the activities and events at the festival, as well as the fun and comraderie. You should definitely check them out if you haven't already: Thursday, Friday, Saturday, and Sunday. Here's Gabi at the sales room, having just purchased a toddler for herself. 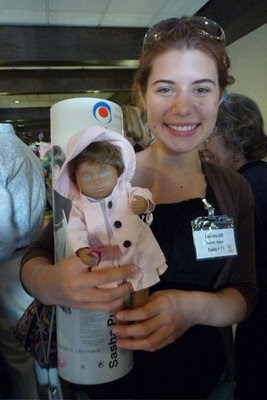 I was fortunate to not only meet Peggy Trauger, but also win one of the items she made and donated to the auction. I rushed upstairs to get Muriel as the auction was ending, so that I could take a picture with Peggy and the outfit. That was a special moment for me. I won six auctions, and also several of the helper drawings; I will try to include pictures of all the items in a future post. 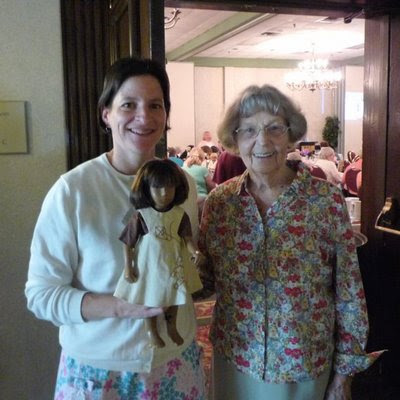 I met so many nice people over the course of the weekend and thoroughly enjoyed conversing with them all. It would be impossible to mention everyone, but I'll single out several people who I happen to have good pictures of and whose company I especially enjoyed: 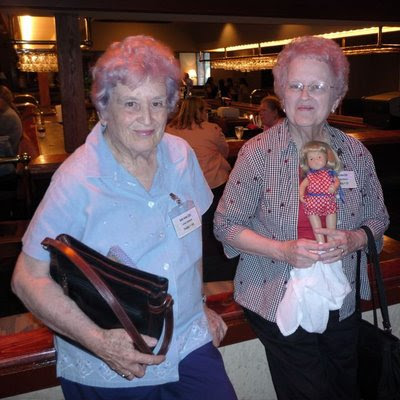 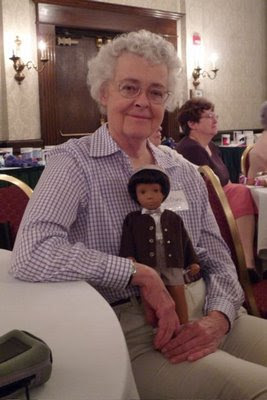 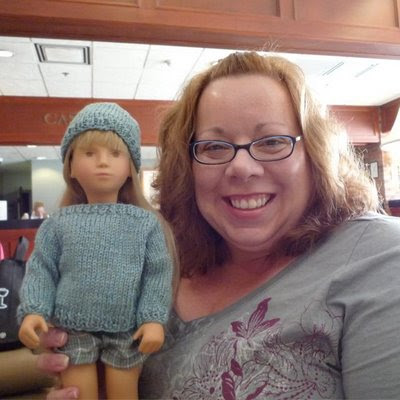 In addition to the socializing, I created three craft items at the workshops: miniature postcards, a bead necklace, and a lilac hat. (I brought home the scrapbook packet but haven't created any memory pages yet). The postcards and necklace were relatively easy to assemble, but the lilac hat proved to be more of a challenge for me. I finally found inspiration with a very dark bunch of flowers. 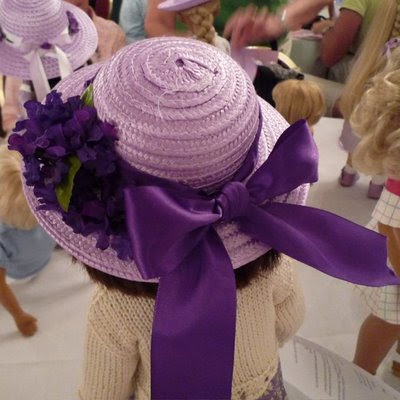 Here is Muriel wearing her necklace and hat, along with Michele's and Tina's dolls also modeling their one-of-a-kind millinery creations. 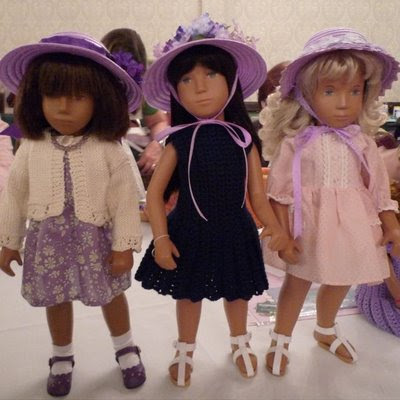 And here are Tina, Michele, and I, holding our dolls at the end of the workshops. Good friends and good fun! 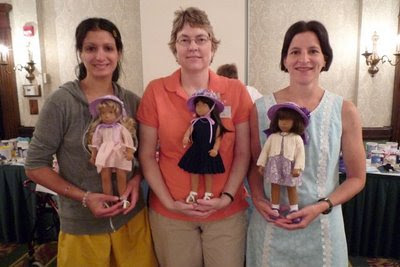 Posted by franberry at 11:49 PM No comments: Links to this post

No, I didn't take out Hester's braids. I own a second redhead wearing the lighter blue dungarees. 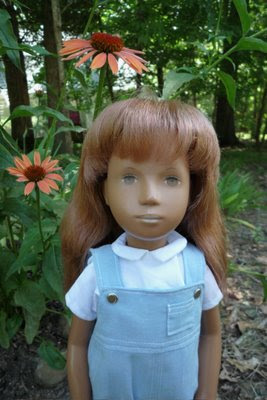 Hedwig came to me from Shelly's UK website, and is not grubby or in need of restringing. :-) According to a tag around her neck, she is from 1969 and was called Pippa by a previous owner. She has obviously been well cared for. 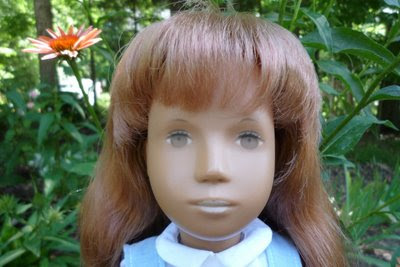 Even though they are from the same year, my four redhead dungarees all look subtly different (a bit like my three blue cords). Look for comparison photos in a post after the Festival.

UPDATE: I braided Hedwig's hair, but she's still very distinct from Hester. Hedwig has deeper bangs and slightly longer braids, plus her lips are a lighter color. It will be fun to see my Dungarees side-by-side in comparison photos. 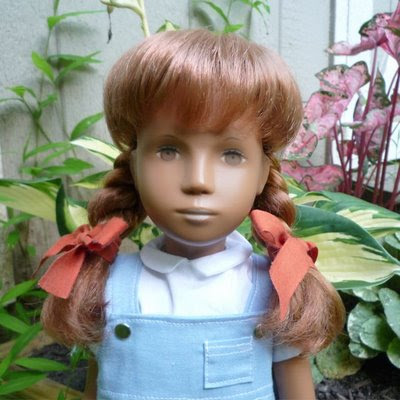 Posted by franberry at 1:13 PM No comments: Links to this post

Hester is the third doll that traveled to Florida for a visit to Pat's spa. I bought her from another collector, so she was not grubby like the other two (from eBay). Her arms wouldn't hold a pose, so I sent her to be restrung. Pat recommended she be cleaned and have some spots removed as well, so Hester also received the full spa treatment. I think it was a wise decision; she looked good before, but even better now. 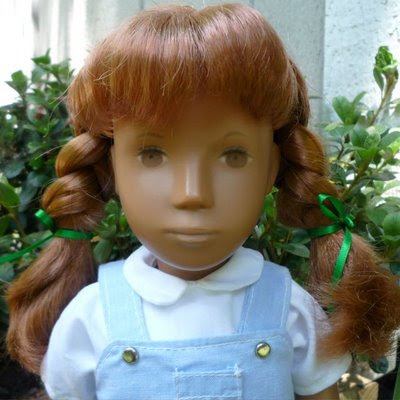 From her original stringing colors, I believe she is from 1969. She wears the lighter blue dungarees, giving her a slightly different look than Harlow and Hayley. 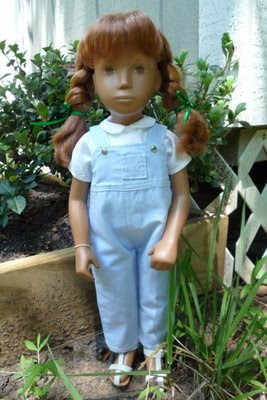 Posted by franberry at 9:40 PM No comments: Links to this post

The 2009 Sasha Festival is happening June 25-28 in Rochester, New York. I'll be in attendance (my first festival!) along with Muriel and Gregor Hiker. Once I get back, I'll summarize my experience and share photos.

The theme is "Sasha Visits The Genesee Valley". From the official Sasha Festival 2009 website:


"Grab your Sasha & Gregor too, and come on along as we explore all the wonderful history of Upstate NY at the Annual Sasha Festival. Sasha & friends will get to sight see and learn about the early women’s movement by Susan B. Anthony and her friends, the Underground Railroad, Harriet Tubman, Abolitionist Fredrick Douglass, the Birth of Modern Photography and much more. See old friends and make lots of new ones."


I encourage you to check out Gabi's festival posts at her PoshKnits blog. She says: "I'm going to be blogging every night from the Festival. I'll have pictures and a description of how the day went and any interesting sightseeing things we did. So for those who can't make it, you'll be able to get a day to day look at what we did!"
Posted by franberry at 9:40 PM No comments: Links to this post

It's been a while since I've posted about a Later Gotz doll. Yamka is the final addition to that portion of my collection (I know, famous last words). Like Ira, Yamka is a limited edition doll from 2001 with an outfit modeled after one of the old studio dolls (shown on page 100 of the book Sasha-Puppen). She was not easy to come by, due to both her limited edition status and the fact that she seems to be on many people's wish lists. I can understand why, as she has quite a unique look. 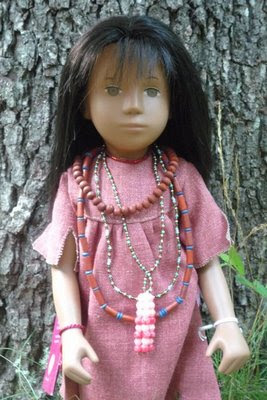 I believe she's the only doll with jewelry as part of her original outfit: she came with five beaded necklaces, and a bracelet spiraled around her right arm (which I've removed temporarily as it left green marks on her vinyl). 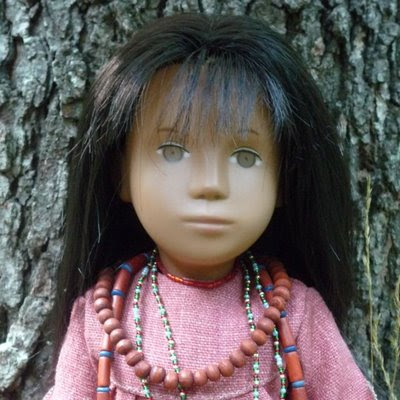 She came with a certificate denoting her limited edition status and number. In addition, she is marked on her torso with her number (268 of 500) and the year 2001.
Posted by franberry at 9:59 PM 1 comment: Links to this post

I've been meaning to write this post for almost a week, but have been busy because the kids are out of school for the summer. We've had rain for several days, but fortunately I took pictures of Desiree before the wet weather arrived.

Desiree was another grubby girl when I purchased her on eBay, plus she had several marks on her right leg and her stringing was very loose. All of that has been fixed now by Pat Pellerito, who did a great job restoring her. As I mentioned in my last post, my dolls returned from Florida "looking fresh and wholesome with ribbons in their hair". Desiree's hair is now pulled back at the sides in pale blue ribbons, which influenced my clothing decision for her. She arrived in a tattered brown cord dress, which I believe was her original clothing. I contemplated buying her a "new" brown cord outfit from Sasha Doll UK, but the hair ribbons were just perfect with the classic gingham dress. 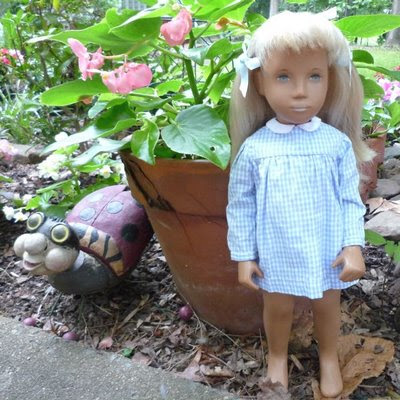 This dress is from around the right period as it has snaps at the cuffs (It came with Hayley, who is also from 1969, and I believe the original owner purchased at about the same time as the doll). I have shoes that came with the dress, but they are currently being used by another doll while I figure out how to repair a broken snap.

Her bangs are a bit short, but they look like they were made that way and not chopped by a previous owner. And the pale blue really brings out the color of her eyes. 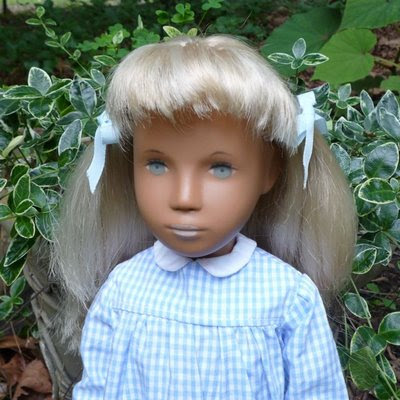 If anyone has knowledge or even suggestions about repairing/replacing snaps, I'd appreciate it. I have a pair of white ankle strap shoes that are missing the "male" half of one snap, and the dress shown above is missing the snap on one of the cuffs. Any help with fixing these would be greatly appreciated!
Posted by franberry at 10:19 AM No comments: Links to this post

My three dolls are back from their trip to Florida, where they received the full spa treatment from Pat in addition to restringing. She did a really nice job cleaning them up, and they returned looking fresh and wholesome with ribbons in their hair.

Hayley is no longer a grubby girl. She was washed inside and out, and had some small marks removed. She can also hold a pose again, which makes her much more fun to photograph. 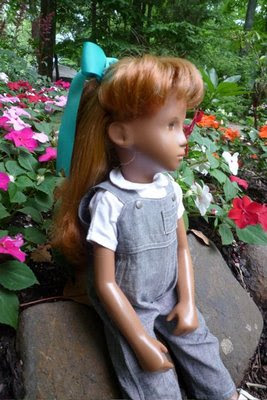 She will probably return to her original braids eventually, but I am continuing to keep her hair down for now. She looks so sweet with it pulled back -- thanks Pat! 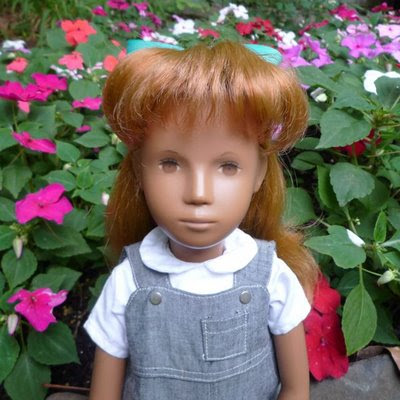 UPDATE: I braided Hayley's hair for some Dungarees comparison photos. Here's how she looks with braids: 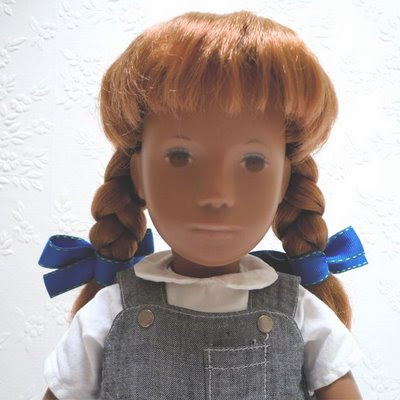 Posted by franberry at 10:03 PM No comments: Links to this post