Occasionally I have Sasha dolls and/or clothing to sell and I will add them to this page.
Email purchase enquiries to: franberry -at- aol.com

This girl is from my own collection.

This girl is from my own collection. I received her in her original box (which alas I did not think to save), which was used to date her to 1984.

I purchased several dolls from their original owner, who said she played with them as a child "in the 70's". Looking at the collection as a whole and all the clues (eyes, stringing, tags, clothing, underwear, shoes), I would say they are from the late 70's to early 80's. Those with tags have the small silver tags that were used from 1975-86, the girls have the neck ring assembly with brown elastic (white in arms) that was used from 1974-86, and the babies are unsexed so 1979-86.

The girls are all fairly petite - here they are shown with two of my mid-80's girls for comparison.

I think she is likely one of the earlier girls of this type. I cleaned her hair using shampoo and conditioner designed for synthetic wigs. She did not lose any hair during this process. She still has her silver wrist tag attached. Her dress has vanished, but she comes wearing her cream silk panties, plain knit undershirt, cream knee socks, and white court shoes. She has a small faint dot on inside of right arm, which is shown in her photo album along with a scuff on her shoe.
More photos can be found in a Picasa Web Album HERE.

None of the outfits that came with these dolls would have been sold on a brunette, so I do not know how this girl was originally dressed. Her eyes look to be sprayed rather than tampa-printed, so I believe she is earlier than the other two dolls (mid-70's?) -- my guess would be a 1974 Brunette Gingham or 1975 Red Dress. I cleaned her hair using shampoo and conditioner designed for synthetic wigs. She did lose some hair during this process, but now that it is dry it appears to be fairly stable. Give the matted state of her hair, I was surprised that she dropped sand from her joints when I checked her stringing.
More photos can be found in a Picasa Web Album HERE. 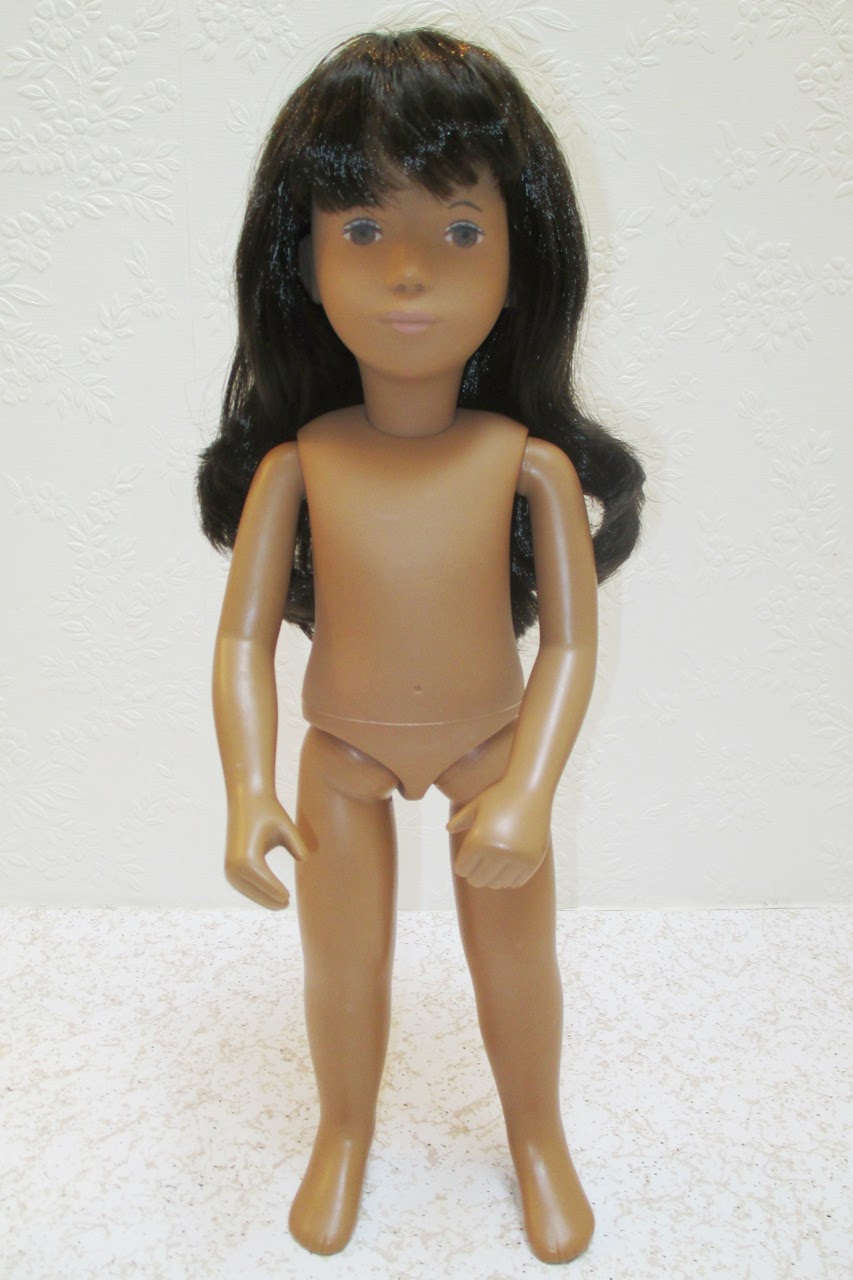 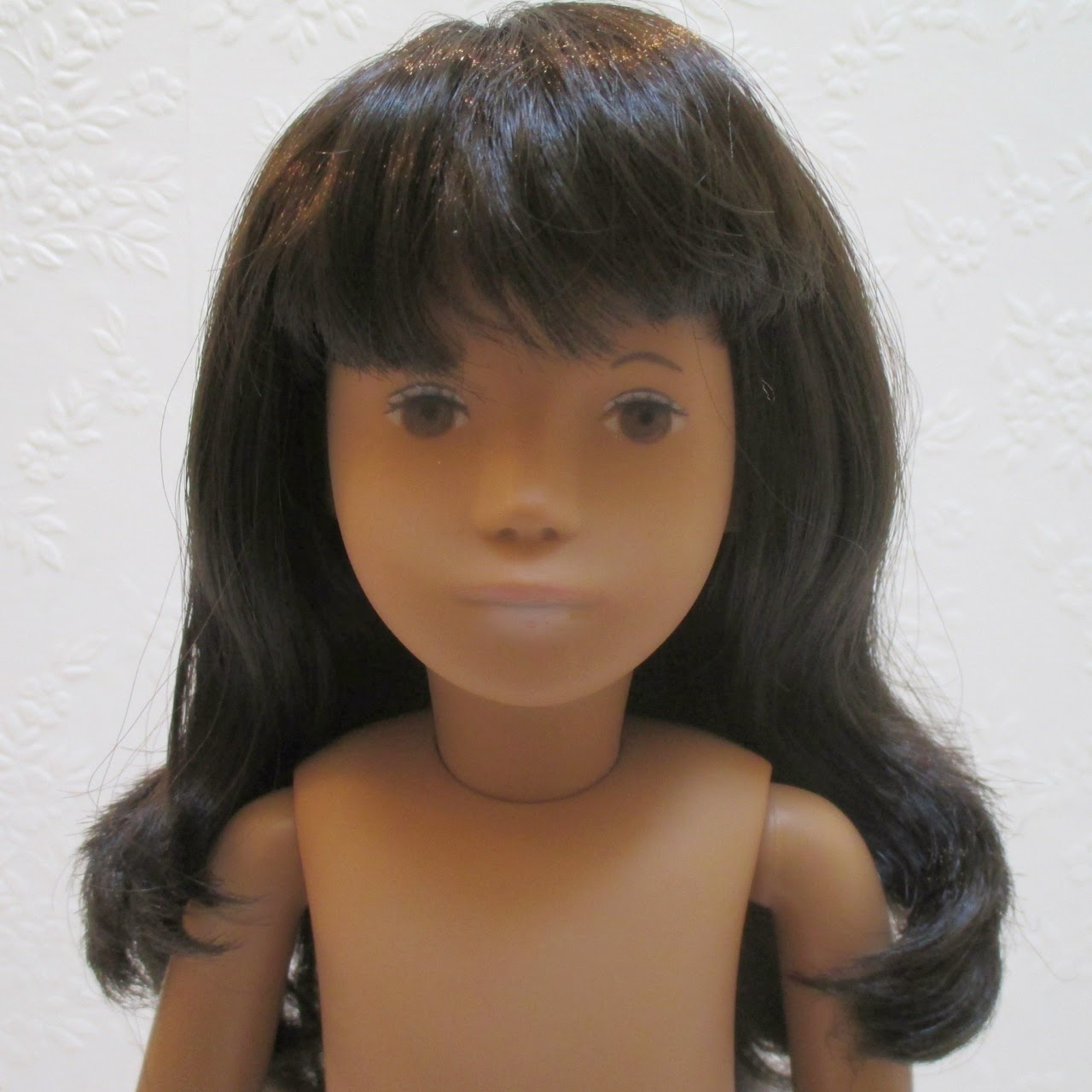 I think she is from 1979 since she is genderless (simply 'she' because brunette babies were girls). She still wears her silver wrist tag, but it was reattached incorrectly at some point. She comes wearing her original outfit: navy corduroy overalls, white terry shirt with red trim, white terry panties, and white snap shoes. Hair is unwashed. I did not see any hair come out when I combed it.
More photos can be found in a Picasa Web Album HERE. 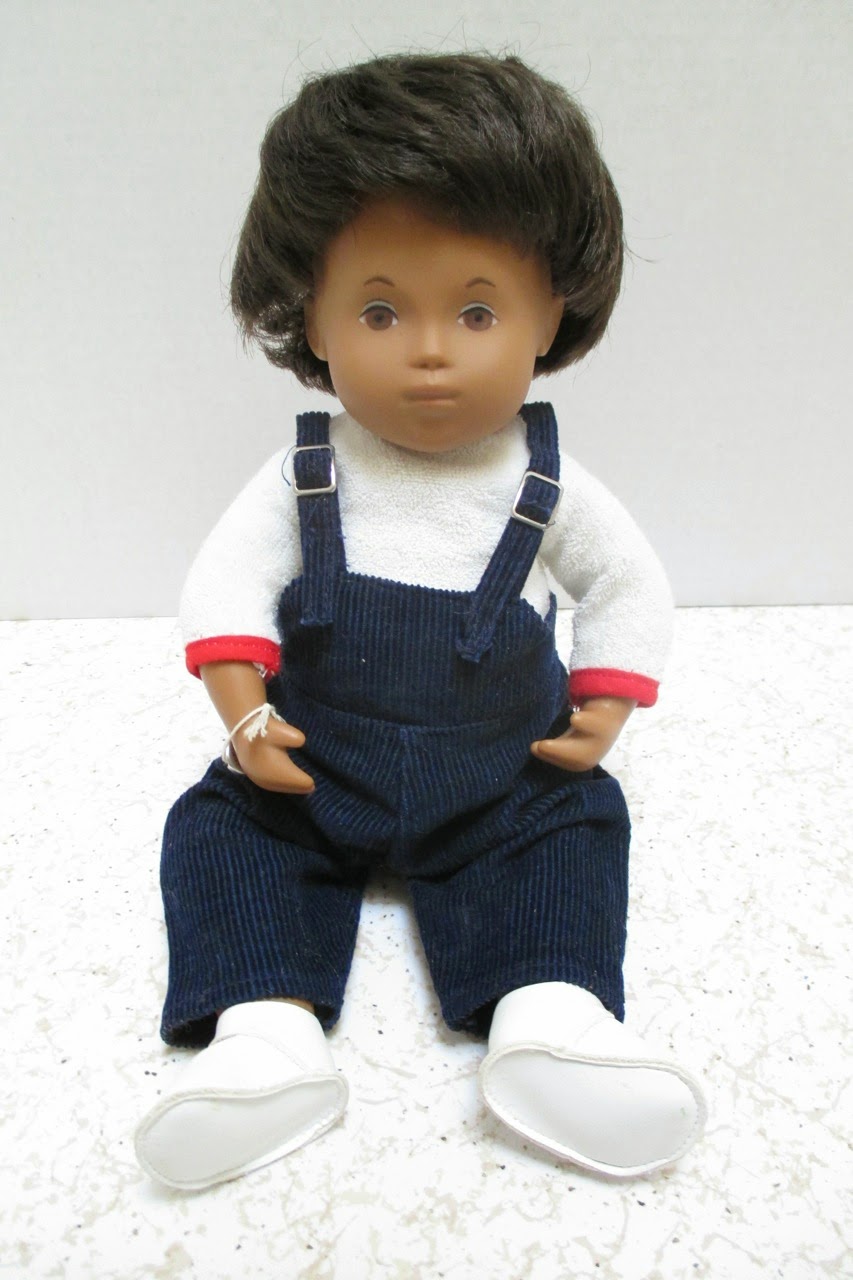 He is also genderless (simply 'he' because blonde babies were boys). I believe he was likely a #503 Baby Boy Nightdress (made from 1971-82, which would make him from 1979-82), but he has lost his clothing. Hair is unwashed. I did not see any hair come out when I combed it. His silver wrist tag has fallen off, but will come with him.
More photos can be found in a Picasa Web Album HERE. 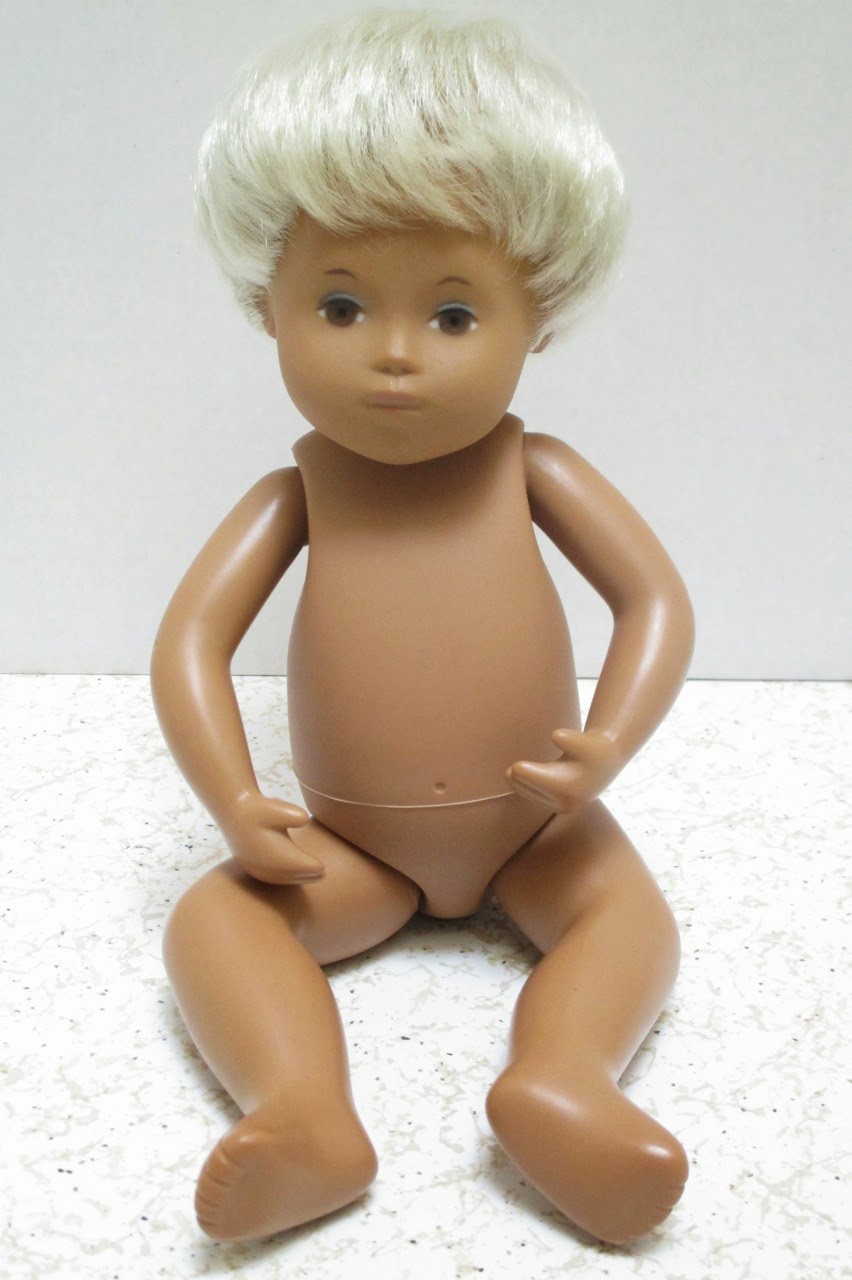 White leotard with velcro closing at shoulder, net tutu which attaches with velcro, white fabric ballet slippers, tartan cape with Newey snap at collar. Looking at Sasha Dolls Serie Identification, this looks to me like the plaid shown in picture 204 (used 1969 to early 70's). I would say this is from the early 70s.

Tartan skirt, white ribbed pullover (hole at underarm seam mended) and matching panties, white ankle socks, and brown laced shoes. This is the same plaid as the ballet cape (above). Looking at Sasha Dolls Serie Identification, the comment under the kilt outfit in picture 217 says the skirts in the dress sets made with the last two tartan fabrics ware flat without a seam. That is NOT the case with this skirt - it has a narrow elastic sewn inside the waist, and the back is seamed half way with a velcro closure at the top. I would say this is from the early 70s.

This set was made from 1971-72. Dark denim jeans, white short-sleeve blouse, white ribbed undershirt and underpants. Note: this would have come with a brown leather belt and brown sandals, but they have been lost and are thus NOT included. I washed the blouse in Oxyclean. 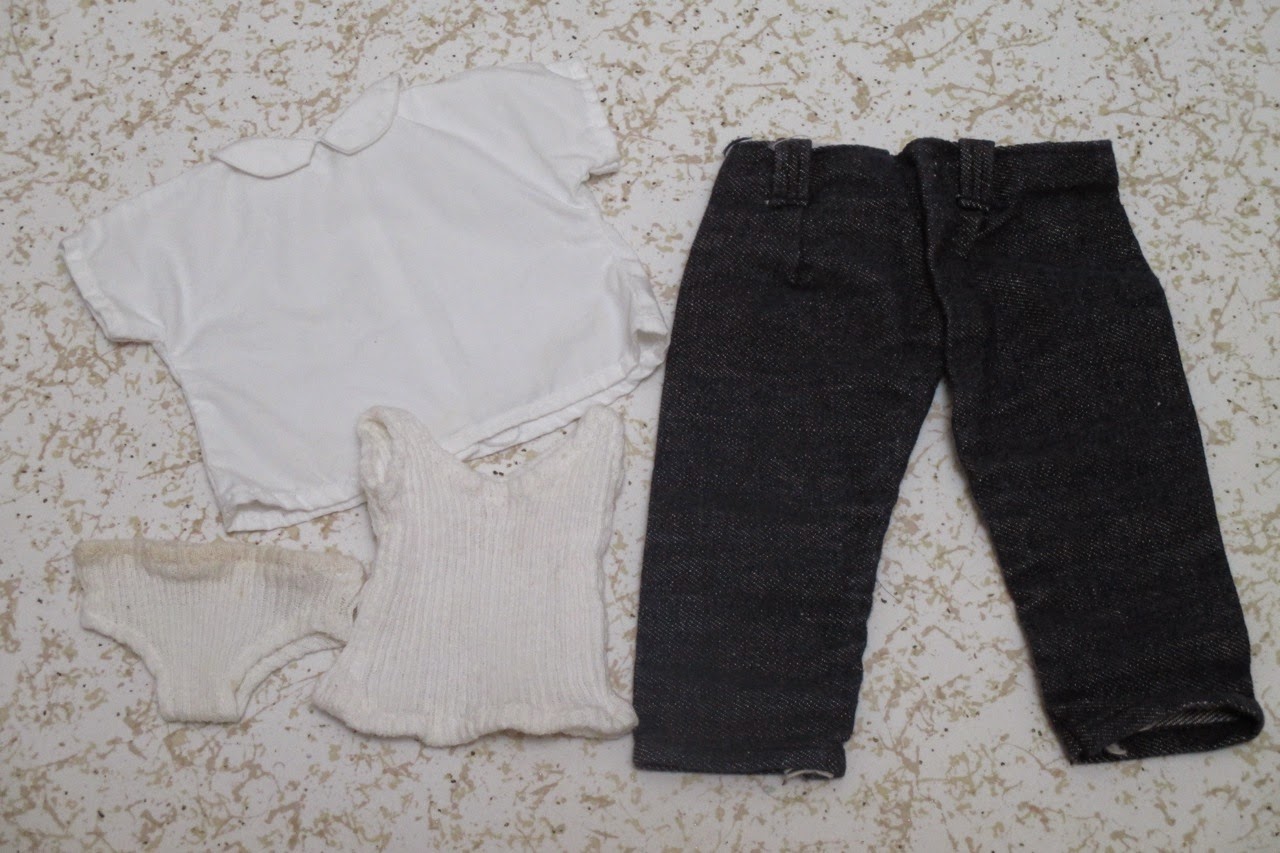 This set was made from 1974-86. Bright blue vinyl raincoat with matching rain hat and tall white vinyl boots. The raincoat and hat are in perfect condition; all spots are light reflection -- they are shiny! One boot has some faint pink spots, as shown in the second picture. 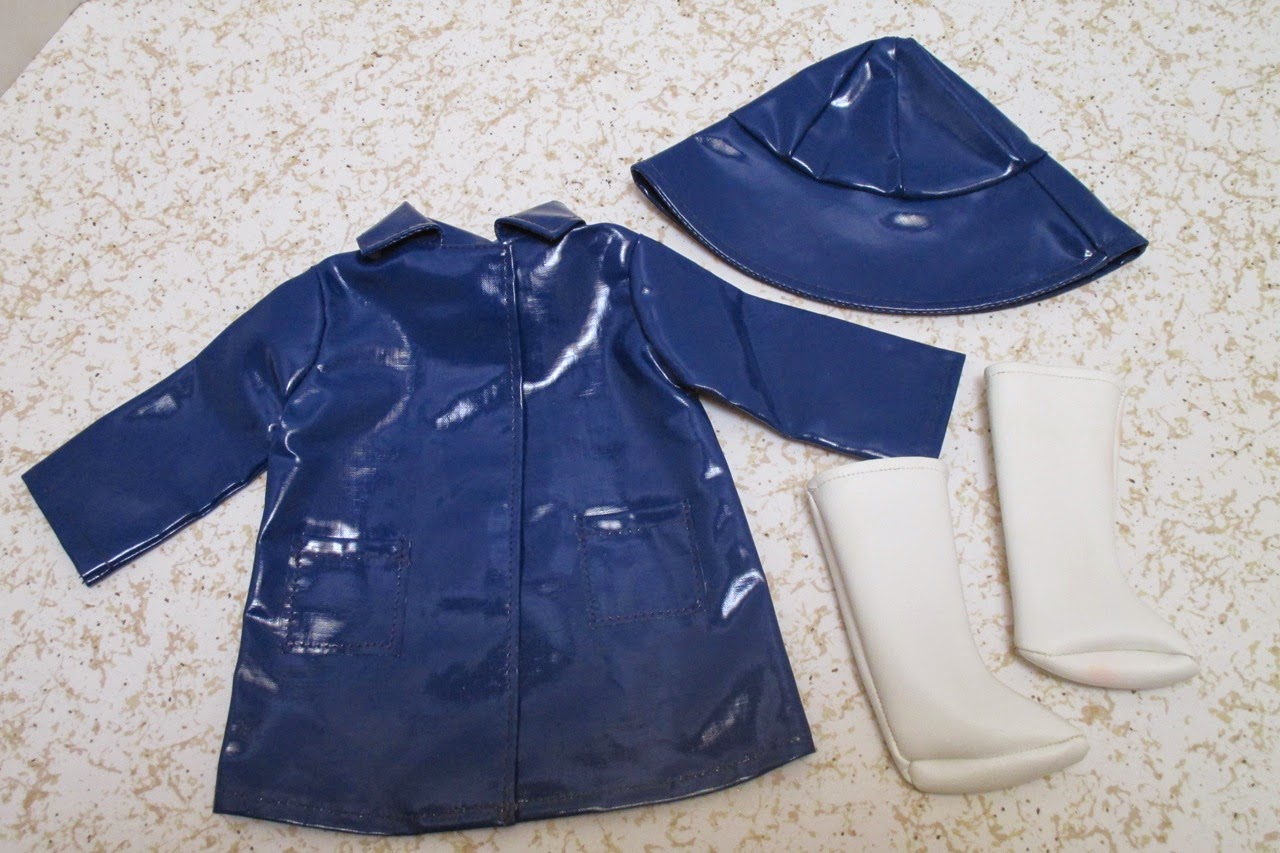 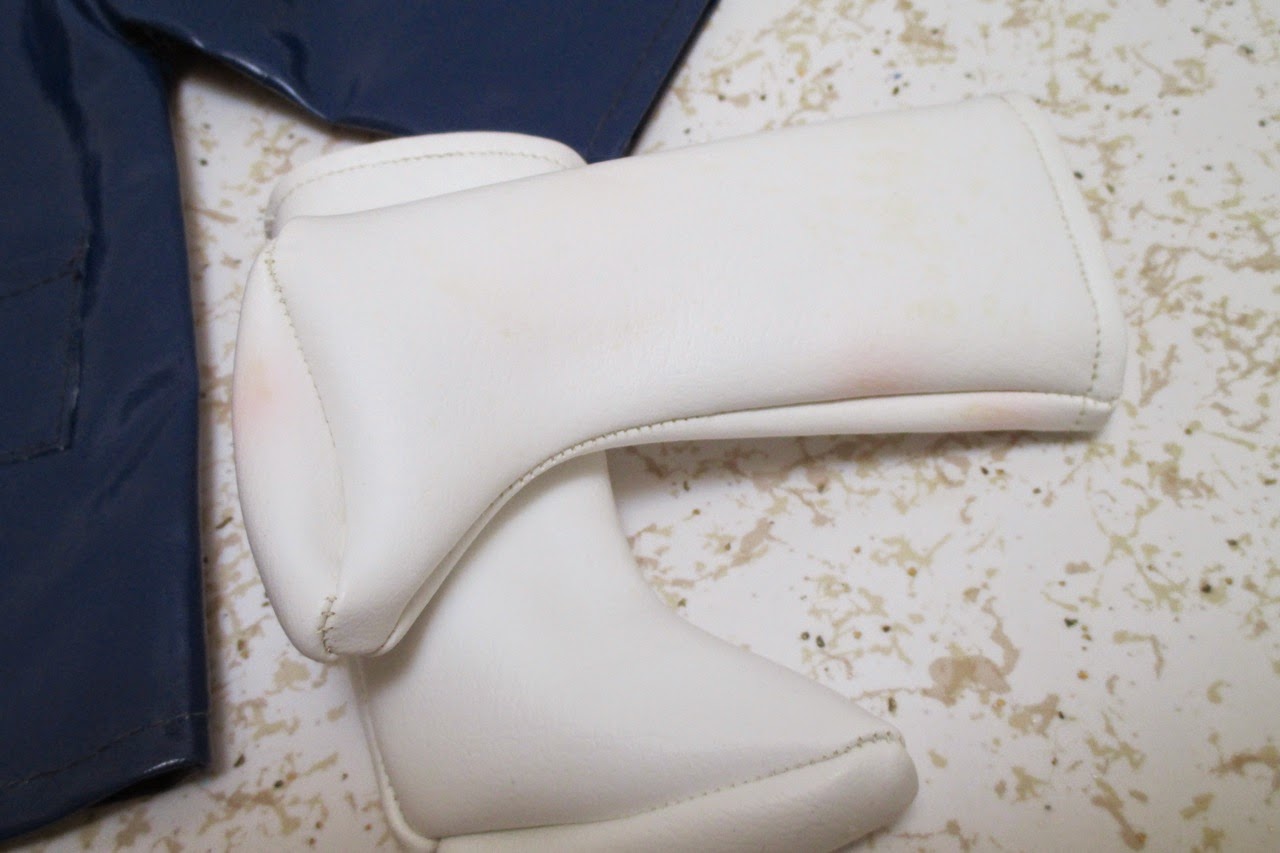